Asia Emerges as the Polestar of Global NFT 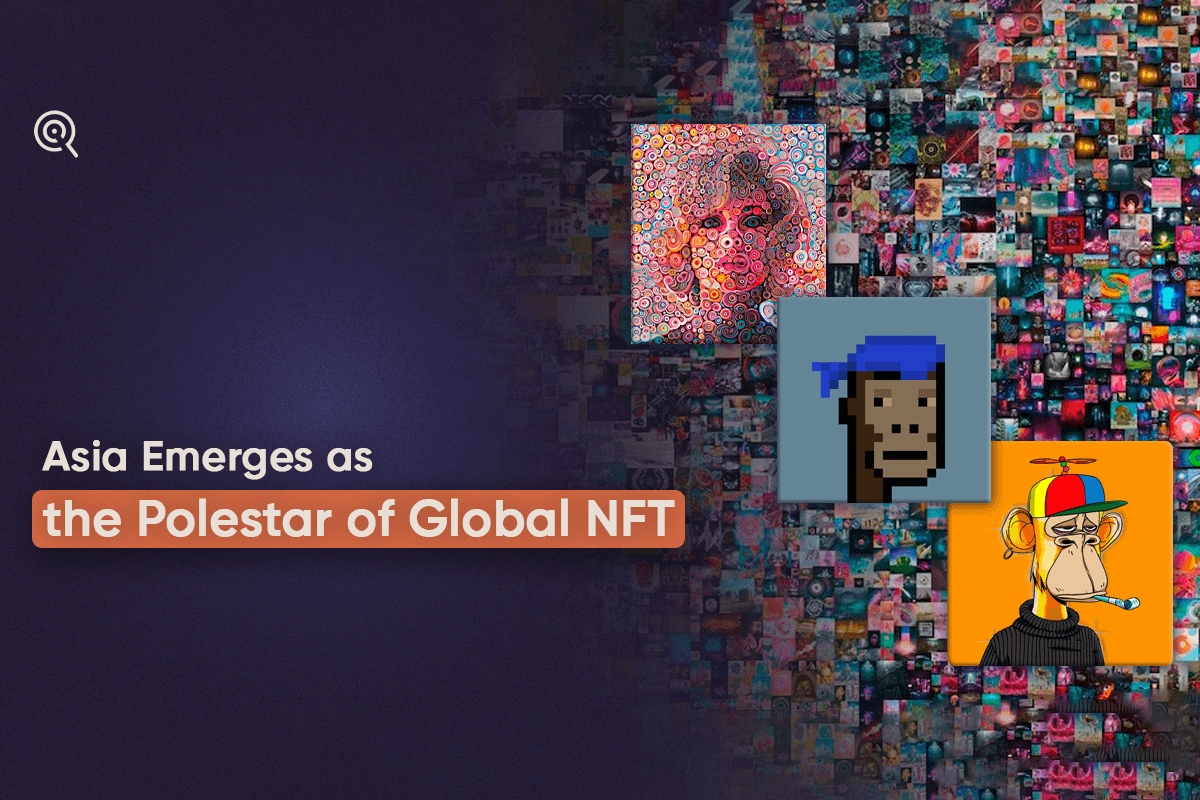 The explosion of Blockchain left everyone thinking when Twitter Co-founder Jack Dorsey’s first tweet was sold as a Non-Fungible Token (NFT) for $2.9 million to a Malaysian businessman. Acclaimed digital artist Mike Winkelmann, known as Beeple, made history in March 2021 when his NFT titled ‘Every day’s: The First 5000 Days’ sold for over $69 million at an auction at Christie’s — the most expensive NFT sale. In recent years, NFTs have become the talk of the town. These digital valuables are selling for millions of dollars from games and art to watches and tacos. Everyone seems to be investing, buying, or creating NFTs.

NFT or Non-Fungible Token is impossible to create, forge, exchange, or manipulate due to its unique properties and authentic certificates, generated through Blockchain technology curbed by cryptocurrency. NFTs exist only in the digital realm – they cannot be touched but can be owned. In addition to digital files, NFTs can also include real-world items, such as artwork, articles, music, memes, in-game items, and videos. They are bought and sold online. Although they have been around since 2014, NFTs are in the spotlight now owing to the trendier ways of buying and selling digital creatives.

Asia has since emerged as the frontrunner in the global NFT craze, with Southeast Asians making up most NFT-based web traffic. Central and Southeast Asia accounted for 35% of the $22 billion in the global trade of NFTs, says research firm Chainalysis Inc. Three Southeast Asian countries — the Philippines, Thailand, and Malaysia – dominate Finder’s web traffic ranking. The most popular countries for NFT searches were China, Singapore, Hong Kong, the Philippines, and South Korea.

The Indian cryptocurrency exchange WazirX launched South Asia’s first NFT marketplace in June 2021, with 15 NFT creators from across Asia. The platform allowed creators to pay minimal gas fees – payments made by NFT creators. Abhishek Kalyanpurkar, a 37-year-old digital artist from Mumbai, one of the beneficiaries, shared to Asia Financial, “It has been life-altering; anyone who is a creator should tap into this growing market. The buyer transfers crypto to my Metamask wallet and I get the money converted through Binance Exchange.”

Social media channels like Discord and Twitter have seen a rise in the number of Central and South Asian artists. Another growth witnessed in the space is through NFT play-to-earn games. Southeast Asia boasts some of the highest rates of NFT ownership globally; one NFT game that saw rapid growth in Asia was the Play-To-Earn “Axie Infinity” game from Vietnamese company, Sky Mavis. To encash the gaming rewards for crypto gamers, Metamask, a soft wallet with 21 million users, claimed that the Philippines is its single biggest market and Vietnam takes the third place with 32% of adults admitting to owning at least one NFT. While Thailand has 27% of its correspondents claiming ownership of an NFT. The country also recently held its first virtual property sale, which allowed users to buy actual property inside Bangkok’s downtown area and become virtual landowners in the Metaverse ecosystem.

The most populous Southeast Asian country, Indonesia, looks particularly promising. Bali, Indonesia’s top tourist destination, is an emerging crypto hub. The nation’s largest crypto exchange, Tokocrypto, recently launched T-Hub, a physical fleet for Asia’s crypto community. Bali has its own physical NFT gallery, the Superlative Gallery, which opened to visitors in January 2022. With a physical crypto zone, an NFT gallery, and friendly visa regulations, Indonesia is a sleeping giant in the NFT scene.

Over 4.5 million Filipinos lost their jobs due to the pandemic, and Axie Infinity became an alternative source of income for many. As part of the game, players are required to own an NFT minted as an avatar called “Axies.” The Axies are purchased or traded through two cryptocurrencies – Smooth Love Potions (SLP) and Axie Infinity Shards (AXS).

“Axie solves one crucial problem that is associated with NFTs – low liquidity,” said Nix Eniego, a 29-year-old Axie Scholarship manager from the Philippines. “While playing Axie, you can instantly use your Axie NFTs. This is not true for creators who sell their NFT art.” Despite the craze, the industry has its share of pitfalls. There have been numerous reports of plagiarized artwork, counterfeit products, and identity theft. Even on the world’s largest NFT marketplace, OpenSea, NFT artists complain that their requests to take down accounts copying their digital art are ignored. Geoffrey Huntley, an Australian IT professional and programmer, shares in an interview with the Business Insider, “Storing one gigabyte of data on a blockchain costs over $76,000, Many NFT artworks claiming to be stored on a blockchain are still using Google Drive or a web 2.0 host. You are spending billions of dollars on a clickable link that will lead you to an image.”

‘NFT Thefts’ is a Twitter page aimed at educating artists on how to secure their digital art from being stolen. The Digital Millennium Copyright Act, for example, provides qualified online service providers like Google a safe harbor from monetary liability for copyright infringement claims. To protect an artist’s creation, NFT marketplaces initiated verification badges for artists owning the work, it remains to be seen if this suffices to assure their creation. Despite these problems, NFTs provide platforms for Asian artists to profit from blockchain technology with their artwork. Artists like Abhishek and other game players have substantially benefited from NFTs through trading their digital collectibles.

Despite the Asian market stagnation for cryptocurrencies and Bitcoin, the NFT customer base is gaining quick momentum in Asia. Southeast Asia is leading the way. With blockchain technology still evolving and utilities being discovered by the day, the NFT market is still considered in its infancy. With most countries ranking high in terms of ownership, Southeast Asia may also become the hotbed of NFTs, as well as the litmus test of public acceptance. But are NFTs worth the money or just another hype? Some experts, even artists themselves believe it’s just the bubble to pop or a passing fad. Others opine that NFTs are the future and are here to stay, which will revolutionize investing forever. While Asia continues to show healthy growth trends, NFTs are expected to explode further.