Dubai on track to become the Crypto Mecca? 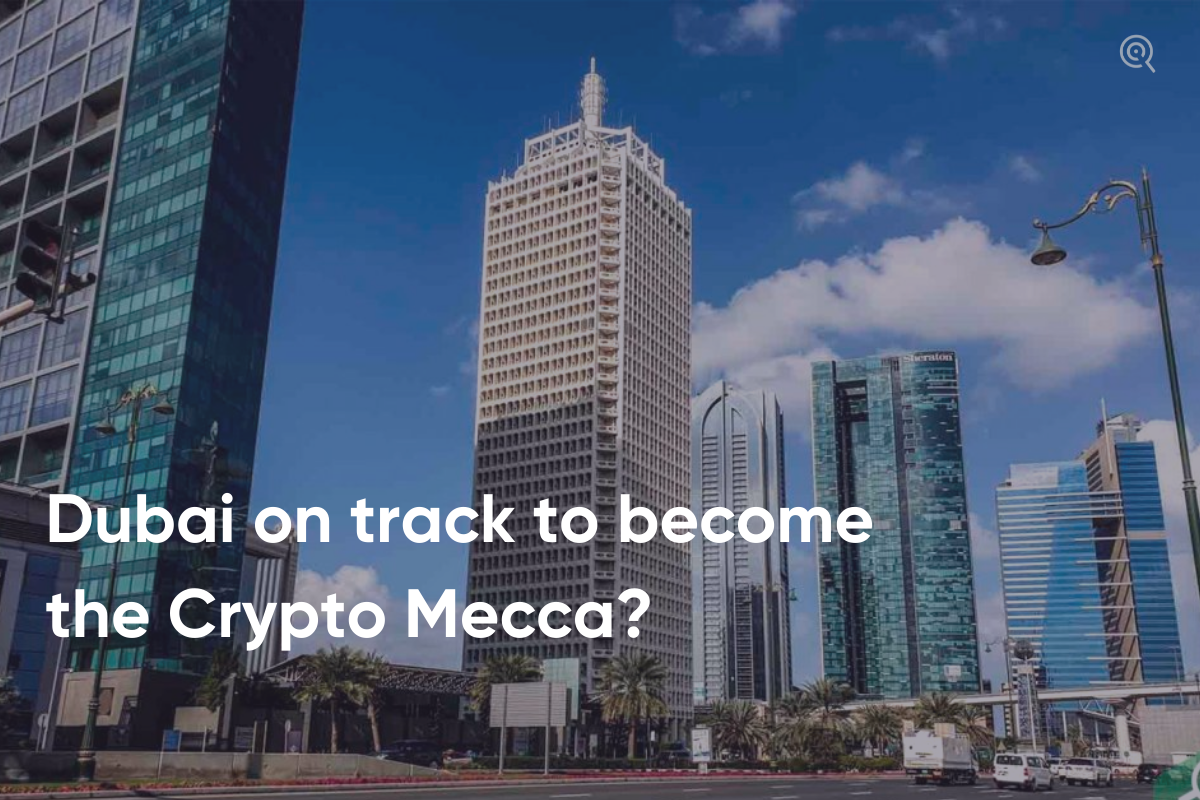 In recent times, the Emirate of Dubai has been making noise in the crypto segment by implementing regulations to become a global crypto hub. Dubai has already attracted the likes of the world’s notable crypto exchange firms to open their respective offices in the region. Similarly, crypto investors are finding the region favorable making them shift their base; here’s a deep dive into some reasons.

Crypto as a domain has been growing rapidly; in 2021, globally, the total transaction volumes increased by more than 500% to $15.8 tn according to Chainalysis. Crypto and blockchain startups across the globe had raised a total VC investment exceeding $30 bn. In Q1 2022 alone, the respective startups received funding in excess of $9 bn. However, many Western regulators appear to despise it.

Perhaps, as a result, neither the US nor the UK has a specific supervisory body for the two biggest cryptocurrencies – bitcoin, and ethereum. Despite having expressed interest in the market, Singapore has implemented tougher regulations. Even India has opposed legitimizing crypto assets and the respective government imposed high taxes on digital assets, without announcing any legal status for the respective segment.

This opens up a lucrative market for ambitious regions willing to construct their regulatory framework around cryptocurrency rather than the other way around. Here is where UAE has stepped up; the ruler of Dubai – Sheikh Mohammed bin Rashid Al Maktoum, the Vice president & the prime minister of the UAE announced on his official Twitter account on March 9, 2022, that Dubai has adopted its first law to regulate crypto assets. The Dubai Virtual Asset Regulation Law was established to promote Dubai as a regional hub for players in the cryptocurrency market. The Dubai Virtual Assets Regulatory Authority (VARA), will oversee the development of the virtual asset business environment in terms of regulation, licensing, and governance. VARA’s virtual presence will serve as the main channel to engage global virtual asset service providers to create applications, welcome new participants, share insights and drive global interoperability. VARA is also expected to increase foreign investments (FDI) in the respective segment. This opened the floodgates and the crypto giants came calling. In April 2022, the world’s largest crypto platform Binance received in-principal approval from Abu Dhabi Global Market, even as its CEO, Changpeng Zhao, is eyeing Dubai as its global headquarters and his base. Binance is planning to hire more than 100 job positions in the UAE as of March 2022 and is helping to shape Dubai’s new virtual assets regulations.

Cryptocurrency exchange Bybit had also announced that it is shifting its headquarters from Singapore to Dubai in March 2022. In the same month, crypto.com which is also based out of Singapore stated that it would establish a regional hub office in Dubai. The move is the result of Singapore’s tightening regulatory grip on cryptocurrencies. Another crypto giant, FTX, with its European subsidiary, has also stated that it will open a regional office in Dubai.

Kraken, etoro, Huobi, OKX, Komainu, etc. are some of the big names in crypto which received virtual assets licenses recently. This shows Dubai’s serious efforts to become the Crypto Mecca of the world as many more companies are also expected to set up their operations in the region. Also, the respective government’s commitment to transform the Emirate into a global hub for the future digital economy remains at the forefront of financial innovation.

The setting up of crypto exchanges has also encouraged the UAE Population to invest in the platforms. The adoption rate of cryptocurrency in the UAE is very high at 35%. The country is only behind Brazil and Indonesia (both at 41%). This shows the region’s interest in cryptocurrencies and the respective population’s desire in decoding cryptocurrency’s true potential. Around 25% of Middle East millionaires have invested in some kind of cryptocurrency. One-third of the crypto owners in the UAE use it to make in-person purchases at brick-and-mortar retailers, compared to the global average of 19%. Bake N More café became the first café in Dubai to accept cryptocurrencies as a form of payment. Sizable customers used their cryptos to pay for their purchases at the café in the first couple of days it started accepting this new mode of payment. Yalla Market which is a quick commerce app operating in Dubai also started accepting cryptocurrencies through its app in April 2022.

Notwithstanding the momentum gained by small businesses in crypto transactions, large businesses in the region also started encouraging crypto payments. One such example is the leading luxury real estate developer DAMAC Properties had announced in April 2022 that it will start accepting Bitcoin and Ethereum to buy properties in UAE. The turning point is that UAE’s national airline, Emirates, plans to accept payment in Bitcoin as stated in May 2022. It was also announced that the airline is planning to add NFT collectibles on the company’s website for trading. This shows the trend of Asia’s emergence as the Polestar of Global NFT.

Dubai has also been focusing on building a metaverse ecosystem. In July 2022 with increased metaverse calling across the globe, the Government of Dubai announced the “Dubai Metaverse Strategy”, which aims to build on Dubai’s achievement of attracting over 1,000 companies in the blockchain and metaverse segment. Additionally, it promotes Dubai’s ambitions to support more than 40,000 virtual jobs in the next eight years. The respective strategy is expected to improve the development of Web3 technology and its applications to create new governmental work models and development in vital sectors, including tourism, education, retail, remote work, healthcare, and the legal sector.

All the hype about Dubai becoming the crypto hub and welcoming the world’s largest crypto exchanges comes with many risks. Dubai is coming under increasing international scrutiny as it falters in combating money laundering. The respective segment’s popularity with criminal elements also raises the risk that a crypto-fuelled scandal could dilute the region’s name. Purple Quarter believes that successful management and regulation of these issues would allow Dubai to become a global leader in FinTech.

Technology leadership is expected to play a crucial role in building a favorable ecosystem for the global crypto platforms in Dubai. We, at Purple Quarter, with the necessary expertise have incubated meaningful synergies between the organizations and tech leaderships for numerous fintechs supporting their scale. Most of these tech-first businesses have leveraged pioneering technologies and gained first-mover advantage all with the right people at the helm at the opportune time. Currently, Dubai is at the precipice of the crypto revolution and it remains to be seen how well they leverage the already favorable factors at their disposal.